Divorce, Debt, and Bankruptcy – Why Your Divorce Isn’t As Effective At Protecting You From Debt As You Think

Contrary to popular belief, the financial bonds formed during a marriage can’t be broken just by filing for divorce. Three common misconceptions about divorce and debt are set out and corrected below to help you learn how to avoid letting your ex pull you down long after you’ve gone your separate ways. 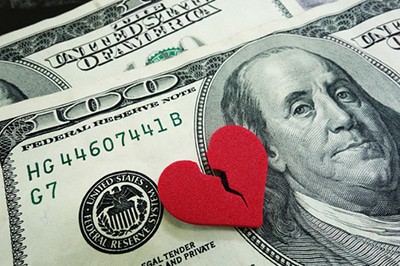 That debt was never in my name, so I’m not responsible for it.

The general rule is that debt incurred solely by one individual is the responsibility of only that person. However, Colorado law creates an exception known as the Family Purpose Doctrine or  Family Use Doctrine which can make a spouse or family member liable even if they never authorized the debt. Colorado Revised Statute 14-6-110 states:

The expenses of the family and the education of the children are chargeable upon the property of both husband and wife, or either of them, and in relation thereto they may be sued jointly or separately.

This means that either the husband or wife can be sued on debts incurred by another family member as long as the item or service purchased was for and used by the family.  Whether the Family Purpose Doctrine makes you responsible for any particular debt will depend on the facts of your case, however it is incorrect to assume that just because you didn’t sign off on that purchase you can’t be sued for it.

My ex took that debt in the divorce, so I’m not responsible for it.

One of the most common misconceptions about divorce is that the assignment of debt to one party releases the other of any responsibility to pay. This is not true – the divorce is a legal order that is binding on you and your ex, but not your creditors.   When one spouse takes on – or assumes – a debt, he or she promises to pay that debt and indemnify (protect) the other spouse from any collection activities by the creditor. The spouse that didn’t assume the debt is still responsible for it, but as long as it’s being paid by the ex, the non-assuming party doesn’t really notice it. The problems generally start when the ex stops paying. Let’s use an example to clarify:

Adam and Jenny buy a home with a mortgage from Blackacre Bank. After several years, Adam and Jenny split up and in the divorce Adam agrees to keep the home and assume the mortgage debt. However, Adam doesn’t refinance the mortgage in his name alone, and Jenny doesn’t quitclaim (surrender) her ownership interest in the home to Adam. Adam pays the mortgage for 5 months after the divorce and Jenny doesn’t hear a thing from Blackacre, so she assumes that she’s off the hook for the debt. Unfortunately, Adam loses his job and can no longer afford to pay the mortgage. This is when Jenny starts getting collection calls from Blackacre Bank. “But Adam took the debt in the divorce,” she tries to explain to the bank. It doesn’t do any good. The bank continues to call, the house is foreclosed upon, and eventually Jenny is sued on the note. Jenny eventually elects to wipe out the debt in a chapter 7 bankruptcy.

In this example, the bank was well within it’s rights to come after Jenny regardless of what the divorce said about the home and mortgage. So what could Jenny have done to protect herself? First, Adam and Jenny make a very common mistake among people who either represent themselves in a divorce or who hire divorce lawyers who don’t understand debt law – they didn’t refinance the loan. Had Adam refinanced in his own name, Jenny would have been off the hook for the debt. A refinance isn’t always available, though, especially if the home doesn’t have any equity.

Jenny’s other option would be to hold Adam responsible under the terms of the divorce decree. Adam agreed to protect Jenny from the Bank’s collection activities. When he stopped paying, Jenny could have sought an order from the divorce court compelling Adam to fulfill his responsibility. This is somewhat impractical and ineffective as well, because a court order to pay doesn’t change the fact that he can’t afford to do so.  While this example uses mortgage debt, the same is true for credit cards and other forms of debt

I included that debt in a chapter 7 bankruptcy filed after the divorce, so I’m no longer responsible for it.

This is half true. While the debt that you owe has been discharged as to the creditor, you’re probably still responsible for indemnifying your ex. Bankruptcy Code Section 523(a)(15), states that debts “ to a spouse, former spouse, or child of the debtor . . . incurred by the debtor in the course of a divorce or separation or in connection with a separation agreement, divorce decree or other order of a court” are non-dischargeable in a Chapter 7 bankruptcy.

Let’s go back to our example of Adam and Jenny to clarify. If, after losing his job, Adam filed a Chapter 7, Blackacre Bank would no longer be able to collect the debt from him. However, his obligation to protect Jenny from Blackacre survives. If Jenny informs herself and asserts her rights under the Bankruptcy Code, the divorce court can find him in contempt and he can be subjected to other penalties. Even though he might not have the ability to pay now, if Jenny’s persistent this obligation will hang over Adam’s head for years.

While chapter 7 bankruptcy may leave Adam on the hook for his obligation to Jenny, Chapter 13 Bankruptcy does provide for the discharge of  assumed debt.

Break the Financial Bonds and Get On With Your Life.

Many of the problems arising out of debt and divorce are easier to avoid ahead of time than to resolve after the fact. Even though you may be on solid ground financially now, it’s impossible to know what will happen in the future and how your ex will react. Bankruptcy is among the best tools to break the bonds that hold people together and drag them down long after a divorce is finalized. Contact an experienced debt relief and bankruptcy attorney as part of the separation process to avoid the unpleasant surprises like those experienced by Adam and Jenny.